A Land of Our Own

Today is International Holocaust Remembrance Day and the 75th anniversary of the liberation of Auschwitz. One of the two days in the year (the other being Yom HaShoah) where the world has the opportunity to reflect on the horrors of the Holocaust. I think, for Jews, that opportunity comes up a lot more often. For someone like me, who has a mild to moderate obsession with the history of the Holocaust, I reflect quite regularly.

I spent last week in Europe, mostly traveling alone. I went to Lisbon, Frankfurt and London on my yearly "mental health break" where I see the world and just breathe a bit (if you can swing it, I highly recommend it.) And in between scavenging for kosher food, seeing the sights, sailing on those ubiquitous European rivers and shopping ("Zaras across Europe!") I did what I always do. I designed my usual "Jordana's Jewish tour" of whatever city I traveled.

In Lisbon, I saw a tiny community, a Chabad that is currently closed until March, no real kosher to speak of (Gd bless their one outpost) and a generally empty synagogue. Portugal has a storied (read: horrible) history with regards to their Jewish citizens. In deference to Spain, Portugal expelled, killed or forcibly converted all their Jews in the 1500's. Jews weren't allowed back into the country for hundreds of years. Today, the Lisbon Jewish community is around 300 and the Porto community ("much bigger!" exclaims my tour guide) hovers around 400. There is also a belief that due to the widespread phenomenon of hidden or crypto-Jews, as much as 35% of the Portuguese have Jewish blood. That's great. Didn't stop me from having to send my passport in advance to be able to be let into the bulletproof gate surrounding the synagogue that, when built, wasn't allowed to face the street. Because Christianity. Moving on to Frankfurt. 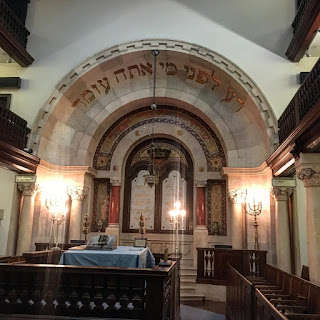 I'm sure it's unsurprising that I may have felt some trepidation as a Jew in Frankfurt. In this particular instance, I came for one full day and stayed with a close friend who observes kosher. Which was wonderful. While my hostess took care of errands, I went to the open Jewish museum (the main one is undergoing renovation) which focused on the Judengasse- essentially the Jewish street right down the middle of the Jewish ghetto-home to all of Frankfurt's Jews for hundreds of years. And, of course, the museum was guarded by two burly, heavily armed soldiers right out front. Because, Europe.

The museum is free and beautifully done and maintained. I saw relics of a time and a place long-gone. I also read stories of regular pogroms, and regular blood libels and absurdly high taxes, and forced money-lending jobs, and displacement, and otherness and Jews essentially being at the mercy of whomever the king or kaiser happened to be at the time. And this, my friends, was one hundred years before Hitler.


Then I went to London and well, I love London. I've seen so much of it so when my host suggested I spend the morning of my last day at the permanent Holocaust exhibit at the Imperial War Museum, I jumped at the chance (it's like she was in my brain!) And as I walked through the impeccably done exhibit, I wasn't focusing as much on the stories and displays as I was on my fellow visitors. I was watching them read and ingest so much of what I already knew and have seen (I've been to Yad Vashem alone well over 25 times.) I hoped they made the connection between anti-Semitism before the war and some of what they heard about in the news today and hoped they'd try to be part of the solution.

A lot of what I thought about was those who try to deny Jews the right to their homeland, specifically anti-Zionist Jews. I had to wonder- have they been to a Holocaust museum? A European synagogue with soldiers armed to the teeth posted outside? A memorial to a ghetto where Jews were made to be outsiders, endlessly wandering with nowhere to call home? Have these people ever really understood the rootlessness, the all-consuming fear that must come from having nowhere to go? Or have they lived their whole lives in the warm embrace of an America or a Canada where they're just as accepted and just as integrated as anyone else in their neighborhood?

I'm grateful to the United States for providing Jews with a safe place to settle after thousands of years of crusades and pogroms and expulsions and Holocausts. But I never take the miracle of Israel for granted and I always feel the luckiest to live here, on my own terms. I wasn't forced to make aliyah (quite the opposite!) and maybe it just takes a quick trip to Europe or a special day like Holocaust Remembrance Day for me to realize that "Never Again" is only a reality because Jews will never be homeless again.

In unending appreciation to the blessed US soldiers who liberated the hell that was Auschwitz, the saintly righteous among the nations, who risked their lives for other human beings, and the State of Israel, for providing a safe haven for all Jews from all places, whether they choose to live here or not. May G-d watch over you and keep you safe.